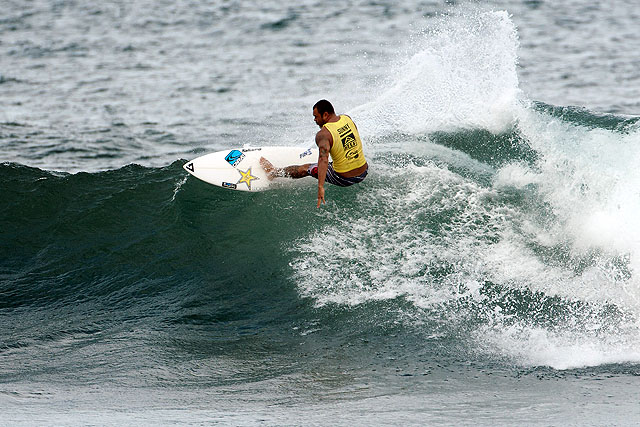 Global Surf News, 31 October, 2013 : – – As the North Shore of Oahu readies for the Triple Crown of Surfing season, Reef announces that Kaipo Jaquias, Brad Gerlach, and Michael Ho will be competing with defending champ, Sunny Garcia in the Reef Clash of the Legends at the Reef Hawaiian Pro at Haleiwa, Nov 12-23.

The Reef Clash of the Legends is a specialty event that runs in conjunction with the Reef Hawaiian Pro, the first jewel of the Van\’s Triple Crown. This year, Reef let the fans decide which legendary surfers would compete in these historic heats. After the first round of voting that ran until October 14, the field was narrowed to Gerlach, Jaquias, Ho, Mark Occhilupo (AUS) Matt Archbold (CA), and Tom Curren (CA.)

\”We are proud to announce the public\’s voice in who will join Sunny in this prestigious event,\” said Reef\’s Global Ambassador and Events Manager, Shea Perkins, \”Glorifying who paved the way for the surfing world\’s elite is such an honor for Reef.\”

Jaquias, 42, is a regular foot from Kauai who surfed the ASP World Tour for ten years, winning the Hawaiian Triple Crown in 1996. He has recently rediscovered his competitive drive, helping the Hawaiians win two Gold Medals in a row at the ISA World Masters.

Gerlach, 48, a native of Encinitas, has had one of surfing\’s most interesting careers. He joined the ASP World Tour and after several years of competing, finished second in the world in 1991. He later came back into surfing\’s spotlight by towing into huge waves like Cortes Bank off the West Coast and developed the National Surf League.

Micheal Ho, 56, is one of the first names in the history books when it comes to Backdoor and Pipeline. He is a two-time winner of the Triple Crown and famously won the Pipe Masters in 1982 with a broken wrist. His two children, Mason and Coco are both professional surfers.

Because of his current status as Clash of the Legends champ, Sunny Garcia, 43 was granted an automatic entry into the 2013 event. Raised on Oahu\’s West Side, Garcia came on the scene in 1986 with a win over Tom Carroll at the Gotcha Pro at Sandy Beach. Garcia won six Triple Crown titles and the ASP World Title in 2000. He continues to be a force each Hawaiian season at 43 years old.

Reef\’s Hawaiian Clash of the Legends began in 2010 when Sunny Garcia bested Curren, Occhilupo and Tom Carroll for the win. In 2011, Ross Williams won the Clash of the Legends Momentum Generation Edition over Reef\’s style guru Rob Machado and big wave pioneer Shane Dorian, as well as Kalani Robb. Garcia once again claimed the Clash in 2012 against 80s counterparts Curren, Occhilupo and Jaquias.

The Reef Hawaiian Pro, slated for November 12-23 at Alii Beach Park in the town of Haleiwa on the North Shore of Hawaii, is an Association of Surfing Professionals PRIME event, which will have a critical outcome for surfers looking to qualify for the elite 2014 ASP World Tour. The Reef Hawaiian Pro also offers a $250,000 purse.