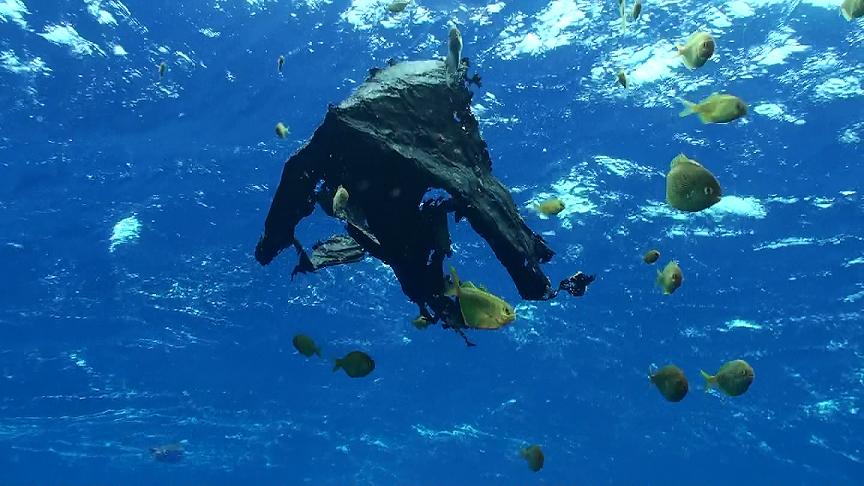 Did you know that approximately 1.4 billion pounds of trash per year enters the ocean? Where does all that trash come from? Where does it go?

Much of it ends up on our beaches washed in with the waves and tides, some sinks, some is eaten by marine animals mistaking it for food. Other forms of pollution impacting the health of the ocean come from a single known sources like an oil spill or from accumulation of many dispersed sources like fertilizer from our yards.

The majority of pollutants going into the ocean come from activities on land. Natural processes and human activities along the coastlines and far inland affect the health of our ocean. One of the biggest sources is called nonpoint source pollution, which occurs as a result of runoff. Nonpoint source pollution includes many small sources, like septic tanks, cars, trucks, and boats, plus larger sources, such as farms, livestock ranches, and timber harvest areas. Pollution that comes from a single source like an oil or chemical spill is known as point source pollution. Often this type of pollution has large impacts but fortunately they occur less often. Discharge from faulty or damaged factories or water treatments system are also considered point source polluters.

Sometimes it is not the type of material, but its concentration, that determines if it is a pollutant. For example, nutrients such as nitrogen and phosphorus are essential elements for plant growth. However, if they are overabundant in a body of water, they can stimulate an overgrowth of algae called an algal bloom. Some algal blooms are considered to be harmful algal blooms because they can have a negative effect on living organisms. An excess of nutrients entering a body of water, either through natural or human activities, can also result in hypoxic or dead zones. When large amounts of algae sink and decompose in the water, the decomposition process consumes oxygen and depletes the supply available to healthy marine life. Most of the marine life that lives in these areas either dies, or, if they are mobile such as fish, leave the area. Habitats that would normally be teeming with life become, essentially, biological deserts.

Marine debris is another persistent pollution problem in our ocean. Marine debris injures and kills marine life, interferes with navigation safety, and poses a threat to human health. Our oceans and waterways are polluted with a wide variety of marine debris ranging from soda cans and plastic bags to derelict fishing gear and abandoned vessels. Today, there is no place on Earth immune to this problem. A majority of the trash and debris that covers our beaches comes from storm drains and sewers, as well as from shoreline and recreational activities. Abandoned or discarded fishing gear is also a major problem because this trash can entangle, injure, maim, and drown marine wildlife and damage property.

Pollution can have an adverse affect on the food that we eat. Heavy metals and other contaminants can accumulate in seafood and make it harmful to eat. More than one-third of the shellfish-growing waters of the United States are adversely affected by coastal pollution. NOAA monitors this contamination through the Mussel Watch program and also provides seafood safety tips through the Fish Watch program.