“Molokai 2010, we didn’t care if we were in the race we just wanted to cross the channel”

To me paddling is my life. It’s what I do and what I’ve always done.  The Molokai channel race (Na Wahine O Ke Kai) is somewhat of a championship of distance season paddling.  Last year a group of us girls all wanted to cross this channel.  So we did, we were the 2nd crew in the race history to have a crew of girls that were all age 18 (the minimum age to race is 18).  Once we crossed the channel I knew I was hooked and I wanted to do this race every year till it was no longer physically possible. 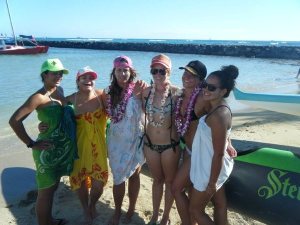 Before we knew it, it was distance season again.  Only thing was none of us had enough money to do all the races.  We were trying to get together a young crew again to cross the channel.  On the weekend of the Queen Liliuokalani race or Labor Day weekend our hopeful crew got some good news.  The owner of Kamanu Composites asked us if we would like to paddle their green canoe the Kawainui back from Molokai.  We all jumped at the chance to be the first female crew to paddle in this unbelievable canoe.  One problem though we are not allowed to race this canoe in the Na Wahine O Ke Kai.  Our canoe is about 200lbs too light and a Tahitian design instead of a Hawaiian design.  But we all decided that we didn’t care if we were in the race we just wanted to cross the channel.  So we decided that we would cross the day before on September 25, instead of September 26.

We were able to recruit 8 girls, although the requirement is to race with 10, it was better than doing the whole thing iron.  We all get to Molokai by Friday night and we were so thankful for one of our girls Court who lives on Molokai, we were able to stay with her.  4:30am wake up, we trailer our canoe about an hour down to Hale O Lono harbor where we will be starting the race.  We get the boat rigged, canvas on, and all duct taped.  1st crew in is Chelsea, Britty, Court, Kel, Pam, and Bobbie.  Kehau, Jullian (our coach), and I go to the escort boat.  30 minutes in and it’s time for the first change.  Were all a little nervous about these changes because we have never paddled in this canoe before and its different then the regular canoes.  The escort drops Kehau and I off in line with the canoe, were changing out seats 2 and 3.  Here comes the canoe I hear Bobbie tell the girls “paddles in, out!” we grab the canoe and were in before we know it.  That wasn’t as bad as we thought it was going to be.  Now just zip up the canvas and start paddling.  Because we only have 8 girls, the amount of time that we’re in the boat for is longer than usual.  Every 15 minutes we change out 2 girls, but some of us have to stay in for 3, 4, or even 5 pieces.  My first change I was in for an hour, then got out for 15 minutes then back in for about another hour.  It’s all good though because I’m doing what I love. 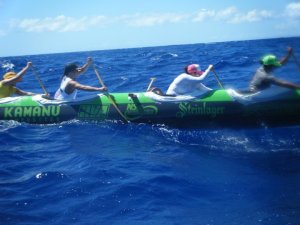 The conditions were less than ideal it was pretty flat, and the little wind and waves we had weren’t really going in the right direction for us to be able to surf.  It was a sticky channel and some of the girls were getting tired about ¾ of the way through.  Water changes were getting harder and slower, the boat would eventually come to a complete stop when we did them.  About half way through we also experienced some equipment malfunctions. The i’akos were only quick strapped so our ama kept getting pushed in, in the back causing us to nearly flip.  2 of the girls were able to re-rig the boat and make it secure enough so we didn’t flip.  I guess there’s a first for everything.  We made it across though! 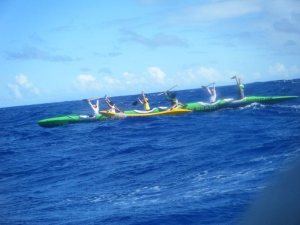 We got to O’ahu at Portlock and were debating on just taking the boat in to Moanalua Bay.  But we remembered last year that the best most fun part of the race was our run from Hawaii Kai to  Magic Island, about 10 miles.  We decided to go all the way to the finish, but we were wrong.  This section of the race this year was worse than the channel.  The little swells we had were too close together to really surf and out girls were too tired to push hard to get them.  We ended up having to put our coach Jullian in to the boat to paddle and put one of the strongest crews we could put in.  We finally started catching some swells, our coach was in there for about 45 min before we got to Diamond Head where we made another change.  Then finally about 1mile off the finish we did our last change with everyone who had not finished the channel before.  We were happy to be done it took us about 7 hours, and most of us had paddled 30 – 35 of the 42 mile course.

Though it wasn’t the best channel we all had so much fun and would do it all over again in a heartbeat.  We got to paddle in an amazing boat, with our friends, and we accomplished something that not many people even think about doing. 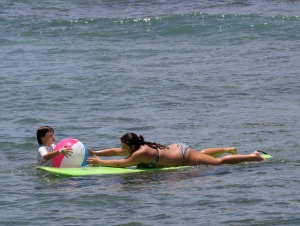 When our beautiful Alanna is not paddling, or rescuing plastic beach balls from the ocean, we are  blessed to have her volunteer for Ocean Girl Project.  With her warm smile and giving style, she shares  her passion for the ocean, surfing  & paddling, what an awesome example for all ocean girls!! Mahalo sweet girl for doing what’s right and not always easy.